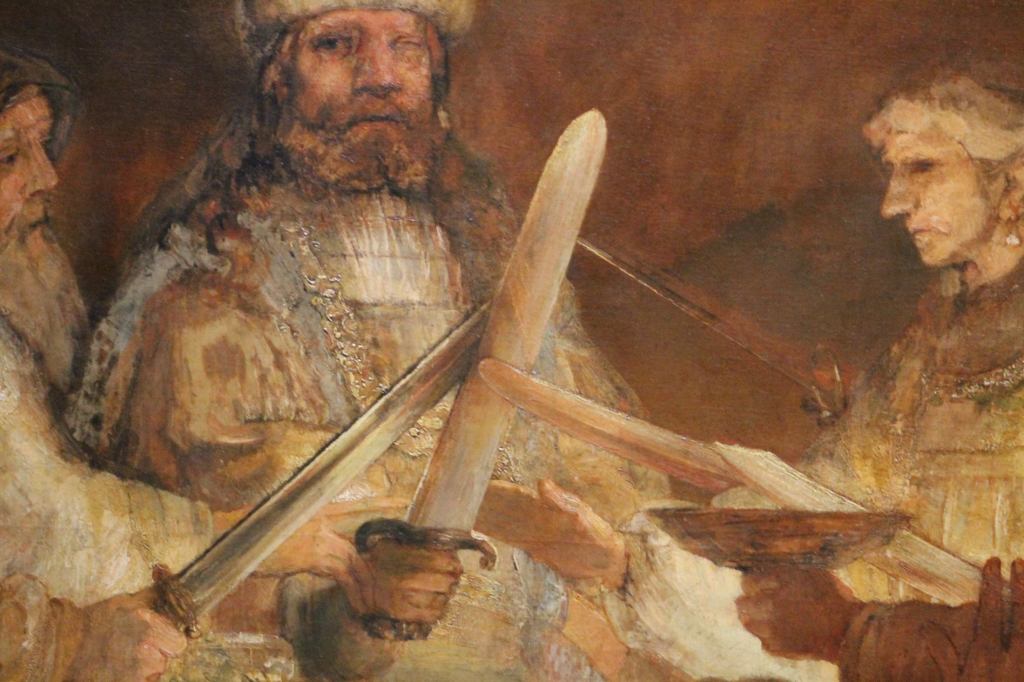 This section I have a list of things I like and dislike, political rants and raves, and just some living observations

First off, I'm been on a recent sabbatical and working on a masters degree in Computer Sciences at Long Island University - Brooklyn Campus. I was already familiar with LIU because I graduated Pharmacy School from there in 1988. So it was a bit of a home coming to return to Campus in 2014 to pursue a Masters. I've learned a lot, and I am doing a truly wonderful thesis on Computational Computing and Artificial Intelligence in Development Cladistic Maps in Paleontology. I'm very excited about this. Phylogeny is an exploding are of research in both biology and computer sciences and I hope to apply a variety of map algorithms to these problems and look closely at the ct scans and 3d models of skeletons for machine evaluation with either traditional expert systems of through machine learning.

Music
- Chick Corea is coming to the Blue Note in Late 2016. October 19th to December 11th. As we are all getting older, this might be the last time to see a vibrant and healthy Chic live in NYC so go.

Stories and Writings from me and my family
- Bridges: Aging and Families
- Esther at 90
- Talyah Leah Safir at the Sea Shore
- Summer Heat and the Moon King
- Talyah Leah's Poetry on Winter
- Ode to the women I have yet come to know.
- Strange Circles
- The Story of Samantha our Cat which I never finished
- The Linux Journal and published articles by Ruben Safir
- Nechumah Sussman Letter of Recomendation
- Ruben's Quotes that others have quoted
Friends - I've managed to collect a few friends from around the world and some are worth mentioning. 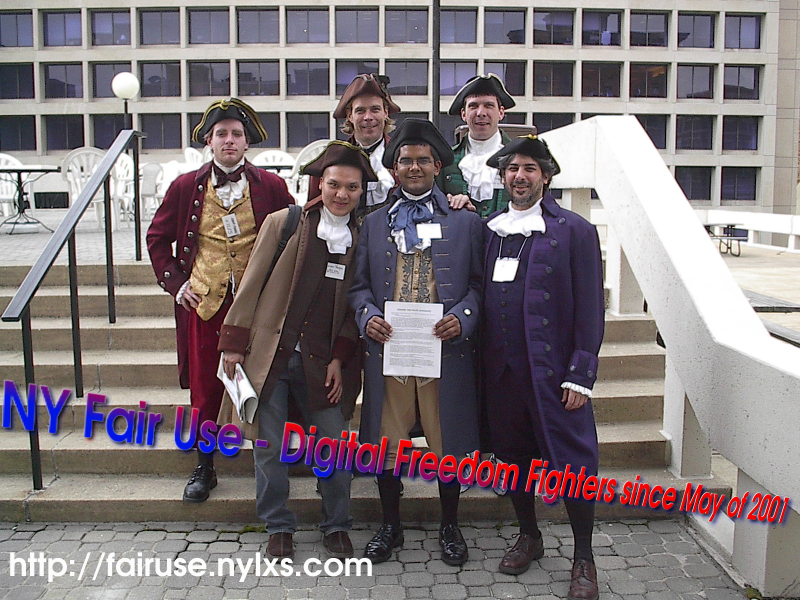 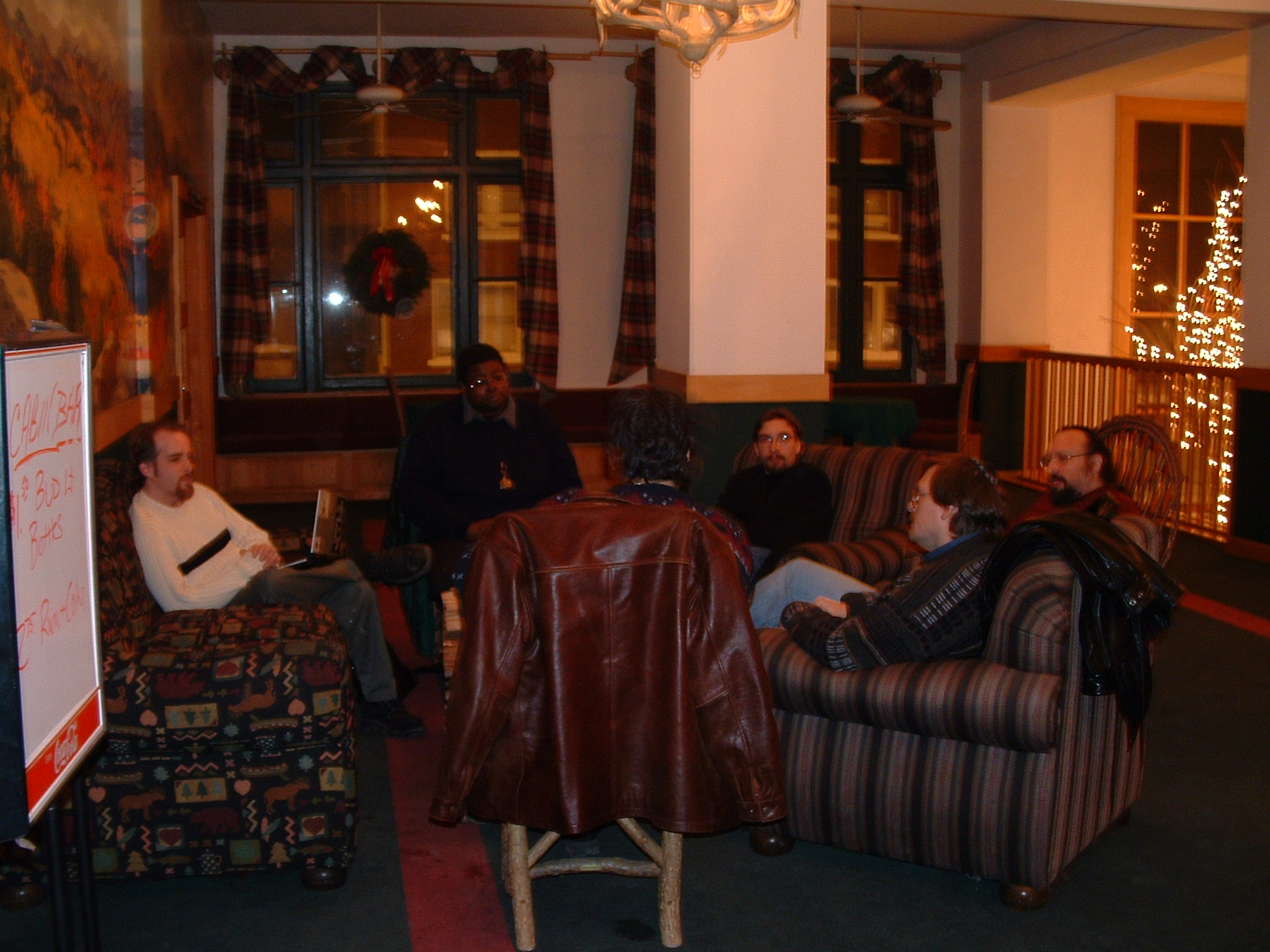 NYLXS at Lake Placid about Winter of 2000
They tend to cluster around a few places, Brooklyn, New York City, San Francisco, Israel, and to a lesser degree in Amsterdam. This is more than a reflection of my travels. Early into the era of the internet, I was amazed at how broad my associations where becoming on a geographical basis. I once gave a lecture on Chumash and Rashi and needed to send Chumashim to 6 Continents. In 1992, this was quite awl-inspiring. Today, I have family around the globe whom I speak to weekly, and trade texts and emails with continually. Anyone growing up in the post-internet world can never know just how local local can feel, when one gorws up in a neighborhood and full universe a couple of blocks large.
- Richard Stallman is a good friend from New York who lives more or less in Boston when he is not extensively traveling. We don't always or even usually agree but he is always thoughtful and I love him as a friend. We do agree about Free Software and Copyright Issues. 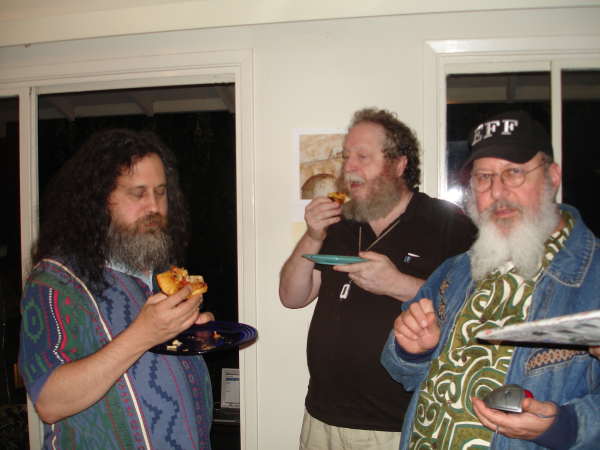 Richard Stallman and Friends in Rick Moen's Kitchen in Menlo Park, California
- Evan Inker who I met at work and has been a strong supporter of NYLXS since its inception.
- Michael Richardson another NYLXSer who has taken to the calling of the Universalists Church
- Paul Robert Marino yet another NYLXSer who is handing building Succahs as well
- David Sugar Member of the Free Software Foundation and Bayonne Telephoney Serivces
- Adam Kosmin An NYLXSer who started the Windows Refund Project
- Rick Moen of Menlo Park who is a close friend and somewhat kindered spirit in Free Software, technology and culture. Rick writes extensively and we can banter someone acrimoniously on the hangout mailing list. He is always well thought out and donates considerable time to friends and community.
- Amy Harmon is the best Science reporter in the US and a constant penpal
- Christopher League - is my faculty advisor at LIU/Brooklyn for my thesis.
- Emma Pearl - who is one of my oldest and dearest friends, and a nice Jewish girl. She has a heart of gold, a velvet voice, even with her English accent, and an expansive mind which absorbs art and culture as quickly as you can feed it. 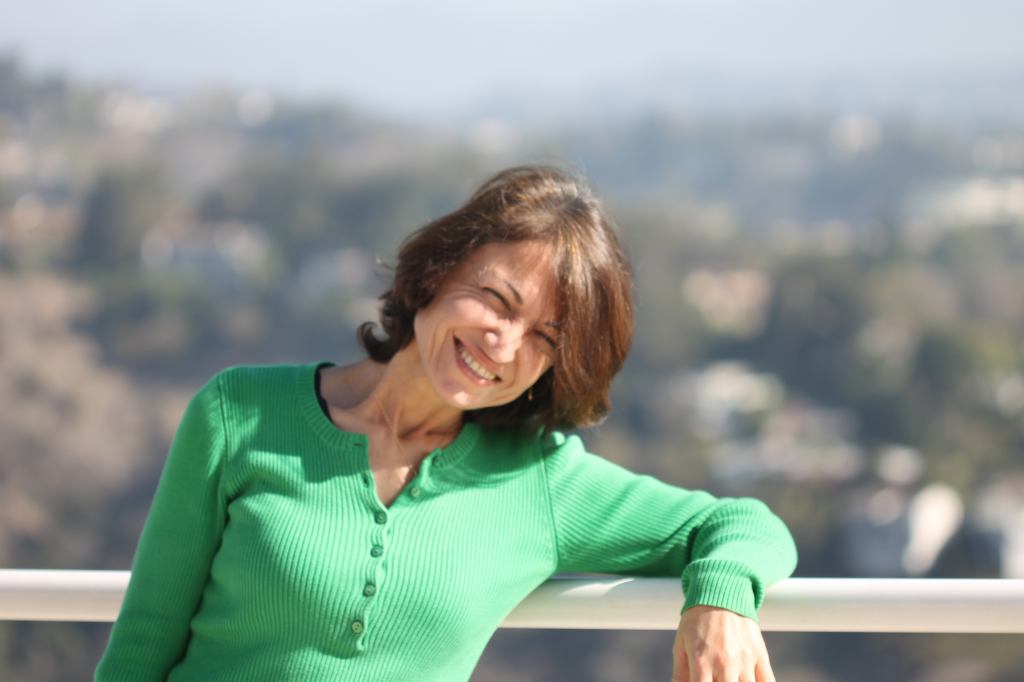 Emma Pearl in Los Angeles at the Getty Museum 2014
- Michael George a dear friend and early supporter of Barrak Obama. Michael was my co-worker from NYU College of Dentistry. He has suffered a stroke and not doing that well, as I understand it. He is always in my prayers.
- Maneesh Kongara is a grad student at LIU and contributor to the NYLXS Journal
- Kamran Mirzoyev is a graduate of LIU/Brooklyn's Comp Sci Masters Degree programm and also a contributor to the NYLXS Journal
- Anthony 'Pelican' Reyes is Captain of the of Marilyn Jean IV and a mentor for all things fishing. We fish all seasons, and I have learned a lot about both life and fishing from this gentleman who is easy to underestimate, and greatly appreciated. 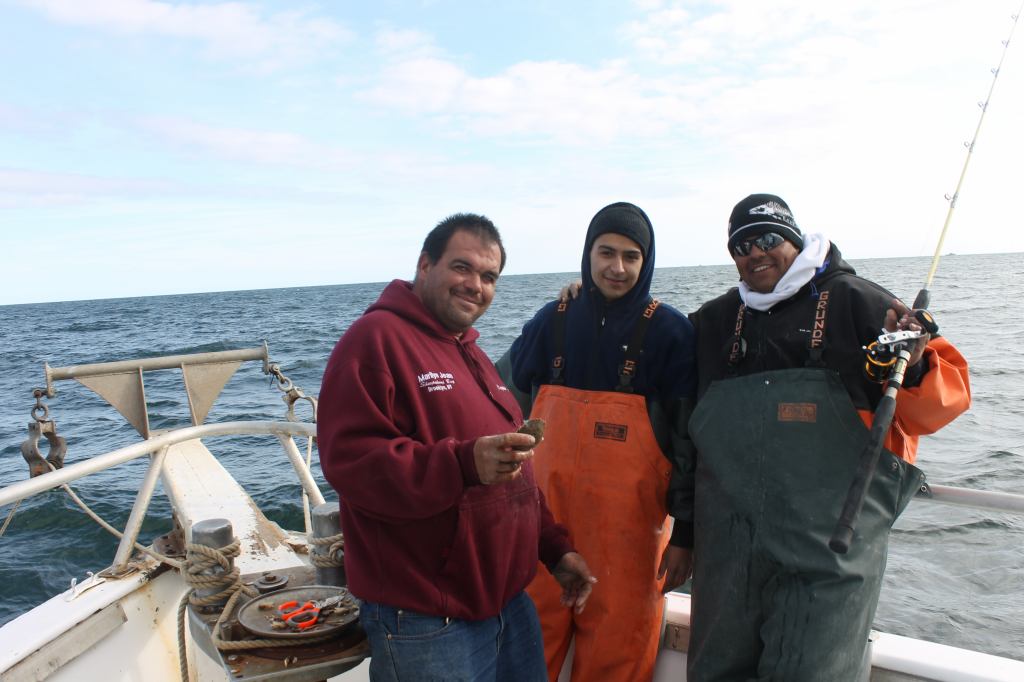 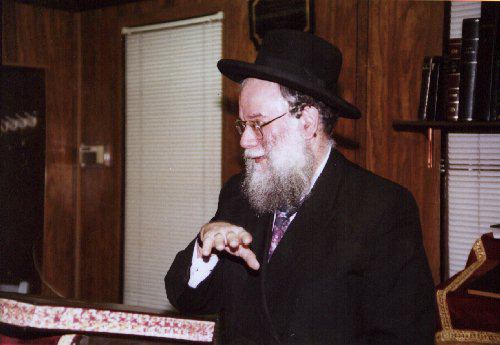 The Rav
- Rabbi Schmuel Zev Friedman - I should probably have put this on top. Rav Friedman was a student of Reb Moshe Feinstein, poskin of our generation. Rav Friedman was the founder and spiritual leader of Marpeh Le'Nefesh, a small synagogue on Bedford Avenue in Flatbush Brooklyn. He is a great Rav, and a man of true patience and compassion. His family is from Austria and he grew up on the Lower East Side and raised his family in Flatbush on Avenue I. He has stood by our family through think and thin, and has been a partner in any and all success that we have had. I love this man and his family as much as anyone and will forever be in his debt. Like many members of this congregation, he now resides in Lakewood, New Jersey.
- Ephraim Nussbaum Great friend from Marpeh Lenefesh (see above) who is a CPA in Flatbush. 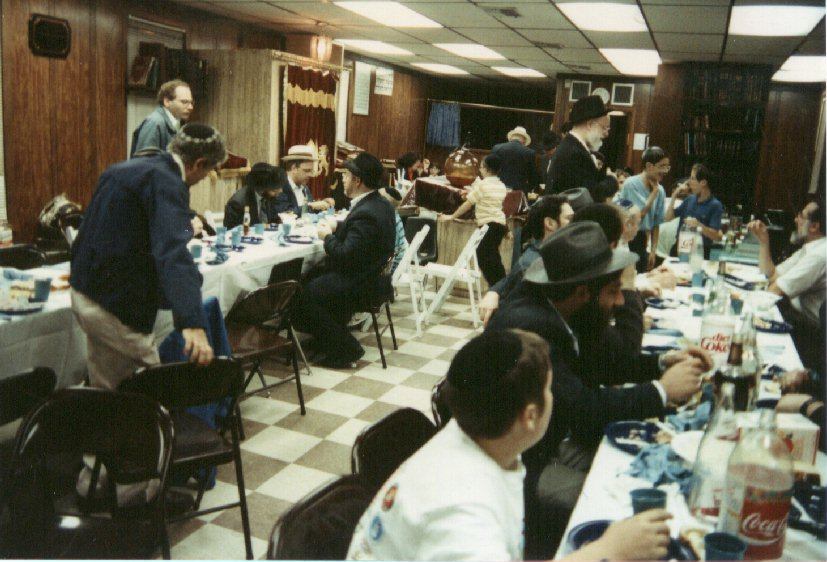 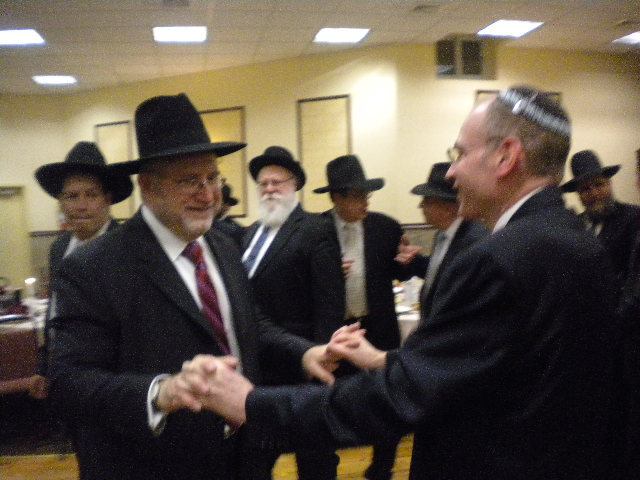 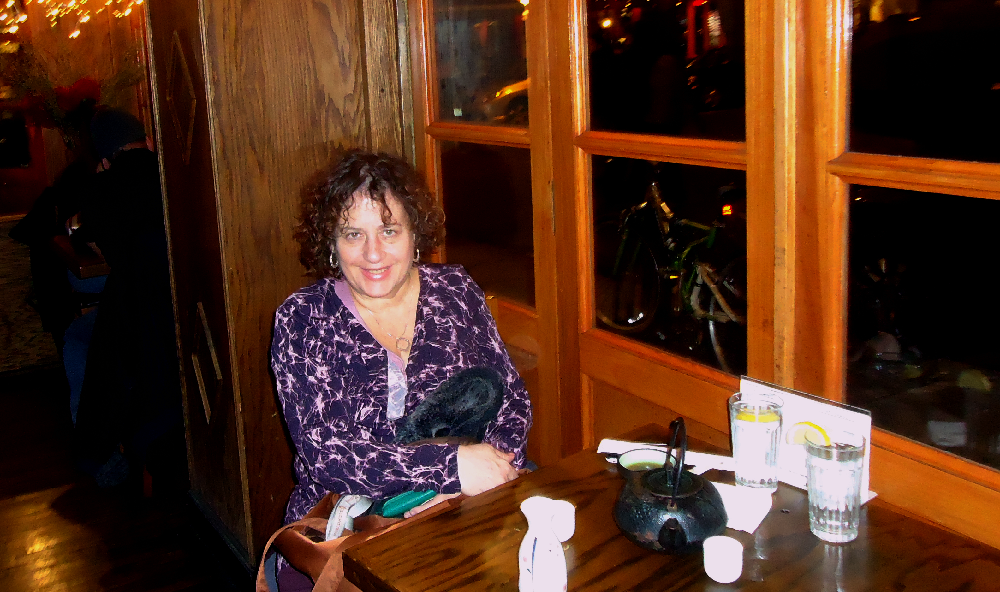 The Lovely Sharyn Lewis - Best Travel Agent on the East Coast
- Sharyn Lewis - one of my oldest friends who is also my travel agent. I met her on the upper levels of the concourse of Rockefeller Center when I needed plane tickets to visit my fiance in Colorado Springs. If she didn't write that ticket. my life would be very different.
Lewis Travel
202 Thomspon Street
New York, NY
1-212-460-0009
NYSharyn@aol.com
- Robert Menes - Member of NYLUG-Hack and Free Software kin from NJ
Photography - over the last 30 years, well over 40,000 photographs have been taken by me and my family. Originally I had a Cannon AE-1 which I purchased from my friend, Gary Stein before leaving for Israel. I had to scan a large number of photographs over time, as we slowly migrated to digital photography. Now we take pictures willey nilley and I have a huge gallery scanning all that material. Areas of photgraphy include: